A few days ago, I decided to give Linux desktop a try because I’d heard so many good arguments on why I should drop Windows and start using a Linux OS instead. The reason I didn’t do this before is that I always thought Linux had an ugly interface, and I was comfortable with Windows as all the other laptops and computers are Windows machines and it’s easy to share stuff in the network e.t.c. Yeah, you get the point…

When I was at the ownCloud conference everyone used Linux of some sort, and to bring a Windows machine was like cursing in the church – not so popular. I had seen Ubuntu before, but didn’t like it. I also had seen some other distros but nothing was appealing to me. I thought the design was to square, no soft edges and not that prudent as I thought Windows were, yeah except Windows 8 ofc… Anyway, I met Jos Poortvliet at the conference  and he showed me KDE which was kind of Windows alike. Still not perfect, i.e. with the low resolution icons (as I see it) compared to Windows. But all the talking about my Windows laptop made me think – maybe I should at least consider change to Linux as I run my server on Ubuntu Server and really like it.

So I started looking around, joined some forums were they discussed the cleanest Linux desktop distro and  eventually I found Elementary OS. I watched some screenshots, and wow – I was impressed. It looked a bit like OSx and had no menu like in Windows 7, but it was really neat and well polished.  As the Apple hater I am, the OSx look was the only thing that made me hesitate, but I decided to give it a go anyway. 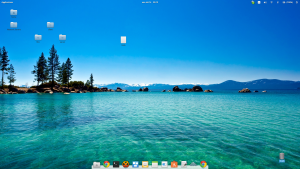 My first test was to install it on a VM. Everything worked as expected and I then decided to make Elementary dual boot on my laptop. The laptop then ignored Elementary and booted to Windows, even if I changed the boot order in BIOS so something wasn’t right. I thought that Windows somehow blocked the Linux install (it shouldn’t do, but you don’t know until you tried) so I decided to go all the way a few days later and wiped the Windows install completely.

Well, I shouldn’t have done that…

Elementary is built on Ubuntu 14.04, and as Dell ships the XPS-13 with Ubuntu, therefore Elementary was the perfect fit. That was my belief until I wiped Windows, installed Elementary (no issues during install, and it found all the drivers) and tried to boot. My “welcome message” was a black screen that said “No bootable device”. Just my luck! It kept me awake the whole night trying to find the answer to why, just why – I mean it should be compatible, I didn’t get it. After 2 days found a workaround and I managed to boot with Super GRUB on a pendrive, and once booted there was no issues running the OS. But who wants to depend on a pendrive to make it boot? Not me.

To solve the boot issue I tried re-format the SSD and make a clean Ubuntu install. That didn’t work either as the Ubuntu installer didn’t find the Broadcom network driver so I had to install without internet. I thought that then only thing I had to do was to install the Broadcom wifi driver on a pendrive to manually install it on the laptop when the installation was finished. Problem is, I never got to that stage as the installation failed installing GRUB completely. It said something about that it couldn’t write to ./target. Omg, this was just too much. So much effort just to make it boot correctly.

Then I tried to install Windows, which went well, go figure. And I thought that I would give it one more try with Ubuntu and partitioned the SSD manually to be sure that the Ubuntu install didn’t miss the EFI GRUB partition or something like that. To my surprise that worked, and I could dual boot Ubuntu, but without internet. But the issue remained, I didn’t want Ubuntu, then I’d rather stay on Windows.  So I decided to run Elementary OS with my Super-GRUB-on-a-pendrive-workaround until I found a solution.

Said and done. I ran Elementary OS for a few hours, and everything seemed to work except the boot thing. Suddenly out of nowhere the touchpad was starting to behave strange and was working REALLY bad. The mouse grabbed the edges of all the windows even if I didn’t clicked/tapped on the pad. When I resized windows I got stuck in many cases and I had to press [ESC] for it to let go. It was happening randomly and really annoying. When I googled the issue I found that there were plenty of reports on the matter, and that you had to apply patches, change in the default drivers and so on…and so on… I was really close at giving up, but I thought to my self that everything is possible, and I wouldn’t just give up like that.

Read the next post about configurations I tried to solve the issue.

Are you interested in moving away from Dropbox, OneDrive or some other public cloud? Try ownCloud by just downloading the VM, no technical skills needed.